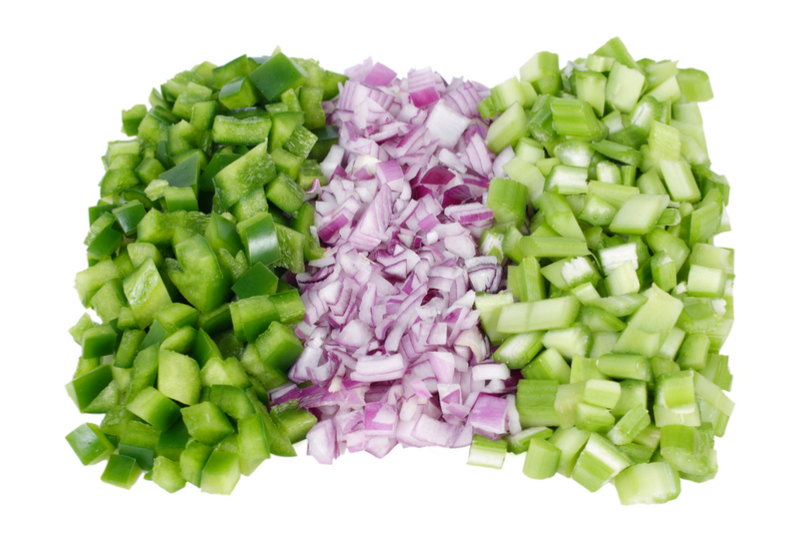 Usually when I think about  bell \peppers, the first thing that  comes to mind is stuffed bell peppers.

However, the most common use of bell peppers is the almost daily use of “The holy trinity,”…used just about in every recipe…such as Cajun foods and Creole foods like etouffee, gumbo, dirty rice, red beans and ricer, and jambalaya…stews, soups…spaghetti sauce…and more.

What is the Cajun Holy Trinity?

The holy trinity consists of some combination of onions, bell peppers, and celery, dependent on the recipe you’re using.

The Cajun holy trinity originated in France however….where another trinity of the local cuisine reigned supreme. This was a basic combination of onions, carrots, and celery…called mirepoix.

Mirepoix had been the starting point for most cooking in France since the 1700s,

When the Cajuns began settling in Louisiana, they expected to start cooking their meals by using the trio of veggies that they had always used in classic French cooking…but this was not the case…because carrots did not grow well in the Louisiana soil. Bell peppers were used instead of carrots.

Even though the Cajuns had been using this mixture for generations, it was not until Paul Prudhomme, the celebrity Cajun chef started using this term in the last 1970s or early 1980s that this became what this combination was called.

Other Spice Blends Around the World

Cooking with the Cajun Holy Trinity

The Cajun holy trinity is not actually meant to be a side dish or meal in and of itself…rather a seasoning blend that breaks down while you are cooking and adds more flavor to whatever you are cooking.

Start by washing the three ingredients. Then mince them up with a sharp knife.

Once the vegetables start cooking down, lower the heat and finish cooking the food until it is transparent and darken in color…about 30 to 40 minutes.